From the Renaissance time period and well into the 19th century, the Gothic style had fallen far from its intended resonance.  Fortunately, such shifts of appreciation do swing back to former appreciation and perhaps glory.  Such is the time in which we now live as more and more Gothic cathedrals, abbeys, monasteries, and cloisters are finding themselves to be art and architecture destinations.  The Western world is better off now that the Gothic is being seen in greater light.  Samuel Taylor Coleridge, in his Table Talk of 1833, wrote the following:  “The principle of the Gothic architecture is infinity made imaginable.”  A mere eight years later, John Keble published the following observation in his Lectures on Poetry:  1832-41 (1844):  “A style of architecture which, to me at least, is, in comparison with all others, the most beautiful of all, and by far the most in harmony with the mysteries of religion.”

What are your thoughts of Gothic architecture as the proper aesthetic form to encase “the most beautiful of all, and by far the most in harmony with the mysteries of religion”? 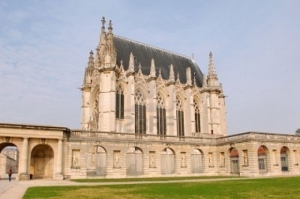 13 thoughts on “Gothic Architecture—“Infinity made Imaginable””

This is a text widget. The Text Widget allows you to add text or HTML to your sidebar. You can use a text widget to display text, links, images, HTML, or a combination of these. Edit them in the Widget section of the Customizer.
Loading Comments...
%d bloggers like this: